My first Kaweco was a mint-coloured Skyline Sport with a medium nib, purchased out of curiosity and for the colour of the pen. It was inexpensive and I was, to be frank, disappointed. I wanted to use it with Diamine Marine ink, which has a lovely rich tone to it in my Parker 45. In the Kaweco it was pale and thin. The nib was prone to hard starts and had a flatness to it, rather like a small stub might. Previously I had only seen that in my Parker Rialto and I didn't like it there.

After taking advice from fellow Slack-ers in the Pen Addict Slack group I tweaked the nib quite a bit. Eventually it seemed to get the message and now writes well, although still with a discernible width to the stroke.

Undeterred, I decided to shell out for a second Kaweco, this time an orange Ice Sport with a fine nib. Again, largely for the colour, as I wanted to keep it in the pen loop of my Roterfaden Taschenbegleiter, which I chose with an orange felt lining.

The Ice Sport arrived and it was lovely. I loaded up a Kaweco pearl black cartridge and all was wonderful in Kaweco-land. Once that ink was exhausted I filled an empty cartridge with Parker Quink black. Oh dear, my little Kaweco didn't like that at all. Hard starts and skips. So the next ink was Diamine Matador - a nice colour for a bright orange pen. Much better, the little Kaweco seemed happy with that, so a red pen it remains.

I was surprised by the difference between the medium and fine nibs. This fine has a definite spring to it and is delightful to write with - as long as a suitable ink is used!

As is always the way with fountain pens, this was good until I decided that these plastic pens felt, well, a little delicate. I know they are supposed to be pretty tough, but I could feel definite movement at the join between section and body. I figured if I stuck one in the pocket of my jeans, or lobbed it into my handbag, I would worry. Of course, I convinced myself I really needed the aluminium version, so one was duly ordered; a nice silver one, again in a fine nib. 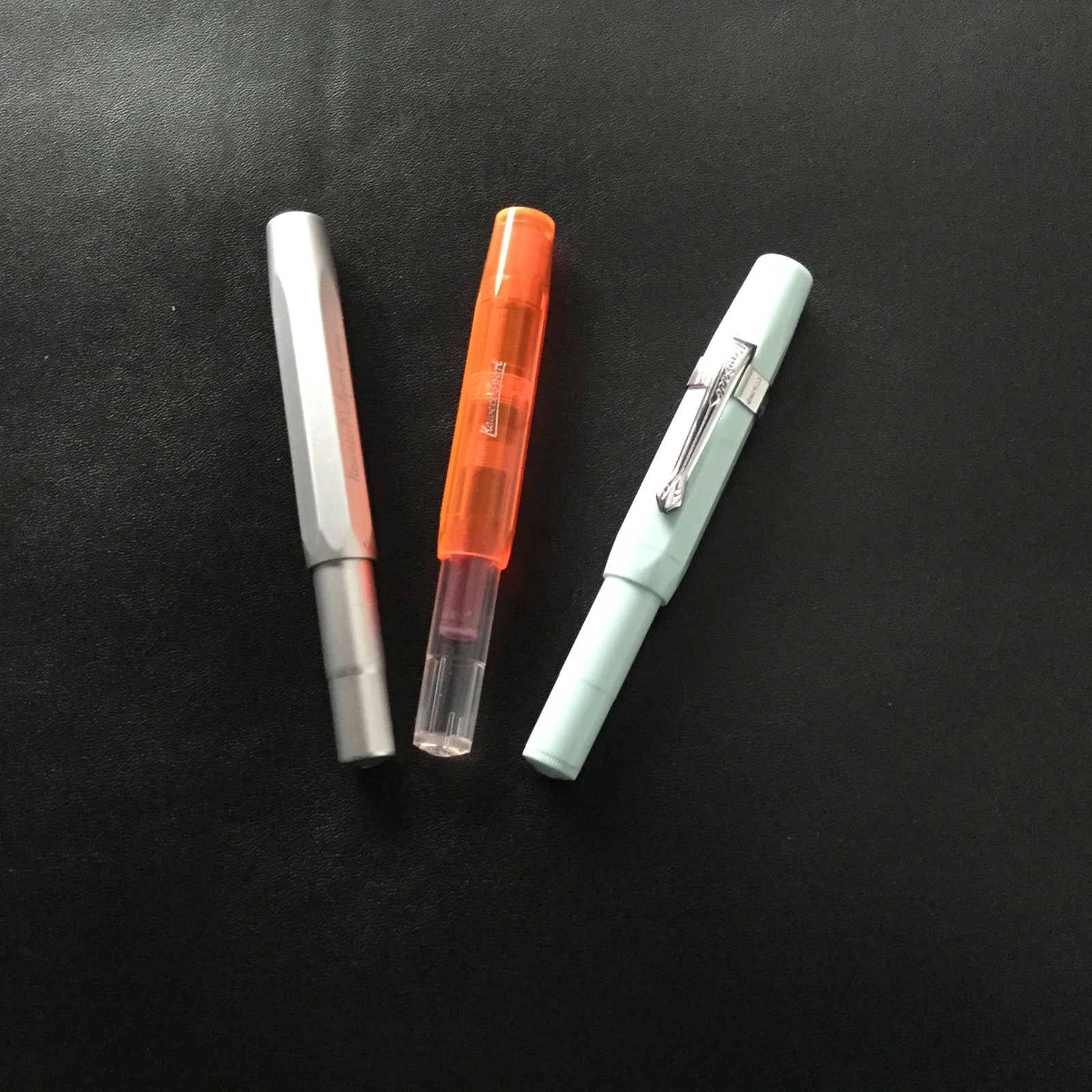 I have to say, it is lovely. I enjoy the way the pen warms up in my hand. I have had it for around a month now and I have used it quite a bit. It does get chucked in my bag, or slipped into a pocket. The fine nib on this one is different from the fine on the Ice Sport - it is more solid, without that slight spring. It writes well, though, with no skipping or hard starts. Of course, the test would come when I refilled the cartridge with Parker Quink, which I did yesterday. It took a little to get going, and on harder paper, does seem to write a little grey, but on more absorbent paper, it looks black enough. That said, it might be time to expand my horizons with regard to black ink. The Kaweco pearl black does seem to have more depth of colour than the Parker ink does - in some pens, at least. My Parker pens stopped working once, when I filled them with Schaeffer black ink, so I stuck with Quink, as black tends to be my favoured ink colour. There are more black inks out there to be tried, though… 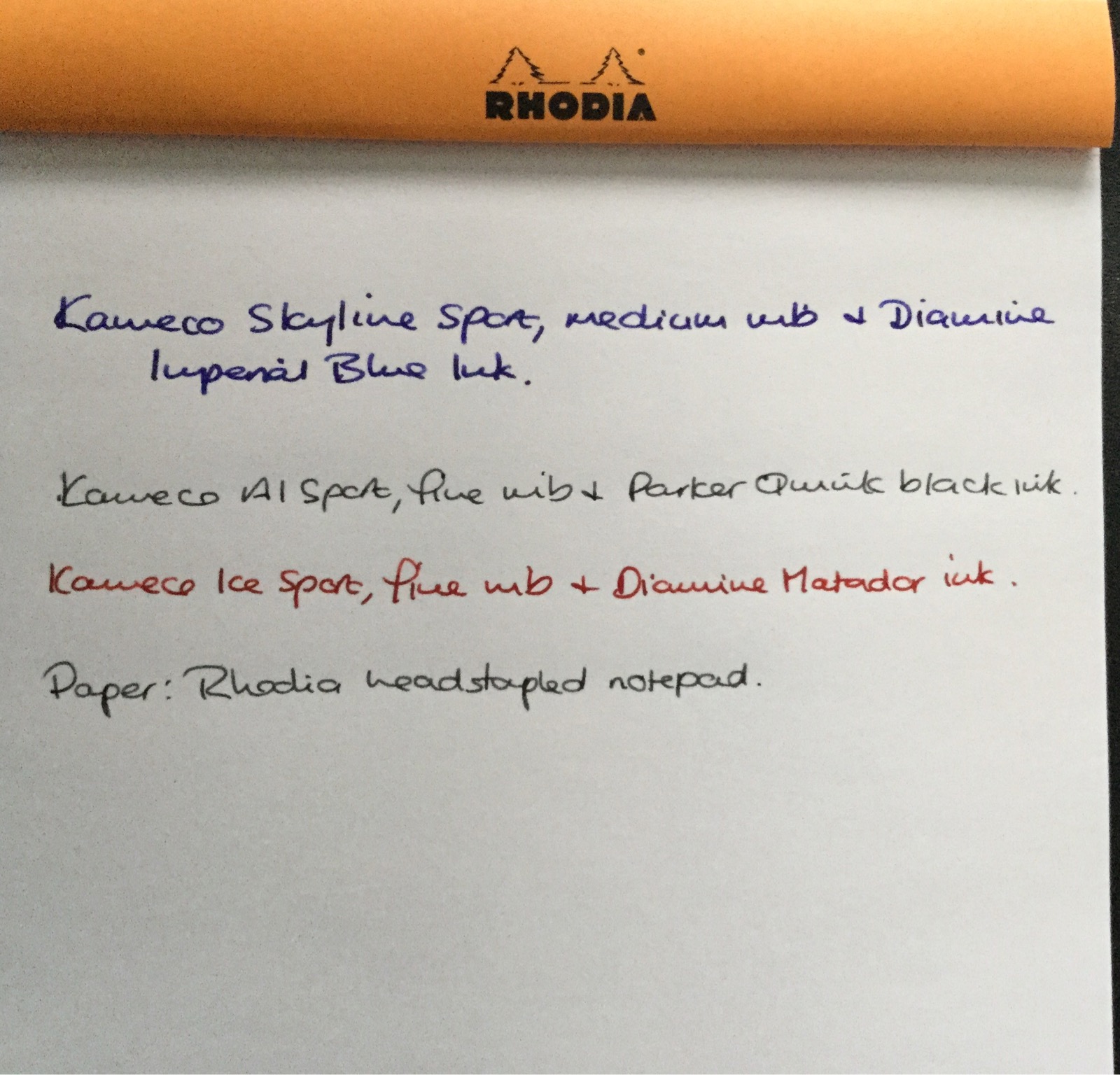